Japan is synonymous with technology. For decades, the country has been recognized as a leading force in the production of high-quality tech products, which has created a population of tech-savvy individuals and an appetite for innovation and convenience through technological solutions.

With that preface, it’s hardly surprising to learn that Japan is the 4th largest e-commerce market in the world, following China, the United States, and the United Kingdom.

With 119 million of their 126.8 million inhabitants connected to the internet and 74 percent of the online population shopping online, Japan is an e-commerce success story, where local brands, like Rakuten and DMM, create a healthy competition with the international e-commerce heavyweights, like Amazon and Yahoo! Auctions.

In addition to a tech-savvy population, Japan boasts wealthy citizens with the means to purchase goods online. According to the Ministry of Economy, Trade and Industry, the value of Japan’s e-commerce market exceeded 13.7 trillion yen in 2015 — that’s 124.4 billion US dollars.

Moreover, thanks to the culture around technology in Japan, the market for m-commerce is large. Even their elderly citizens are known to make mobile purchases.

While the usual international suspects are present in Japan’s top 10, it is clear that local brands make for serious competition, and Japanese consumers have their own unique trends that do not follow suit elsewhere in the world.

What really differentiates Japan from other progressive e-commerce markets is the significant popularity of peer to peer (P2P) or customer to customer (C2C) platforms, such as Yahoo! Auctions Japan, Mercari and Rakuma. While these kinds of peer to peer marketplaces are increasing in popularity worldwide, Japan has the highest number of these sites in its top 10, indicating a deep love for these platforms amongst its population.

Fashion is the largest segment in Japan’s e-commerce market, which is apparent when analyzing the country’s top-performing sites. But besides the traditional e-commerce platforms, the range of auction, second-hand, and hand-made marketplaces, makes for an exciting e-commerce landscape in Japan, where the brands sold on the site may be less important than the function of the site itself.

To better demonstrate the e-commerce dynamics in Japan, we’ve uncovered the top 10, highest performing e-commerce sites in Japan, using results from SimilarWeb, as of January 2020. Amazon was founded in the US way back in 1994 and set up a presence in Japan not too long after, giving it a substantial amount of time to become a leader in the market. Starting as an online book store, Amazon has transformed into the go-to-place for anything anyone could think of, be it books, clothes, food, computing, or video streaming.

Amazon Japan is the 5th largest website in the country and the 5th largest e-commerce site in the world. Locally, Japanese people predominantly use the site for its news and media and e-commerce shopping services, enjoying access to a range of products including electronics, apparel, furniture, toys, jewelry, media, and more. Rakuten is a Japanese e-commerce mega-brand that allows businesses to sell their products directly to consumers on the platform in a variety of categories, including electronics, clothes, accessories, home equipment, cosmetics, and more.

Launching in 1997, Rakuten has expanded significantly. In 2018 it merged with former competitor, Fril, and in 2014 it launched the wildly successful brand, Rakuma, an e-commerce flea marketplace operating mostly through mobile-commerce, which has since led the peer to peer marketplace market in Japan. Yahoo! Auctions Japan is the largest online auction and flea market app in the country, where consumers can find items that are not available on the traditional Yahoo! Shopping site. While it is most famous for its auction function, there is also an immediate sale feature that sellers can choose, allowing consumers to pick up quick buys. 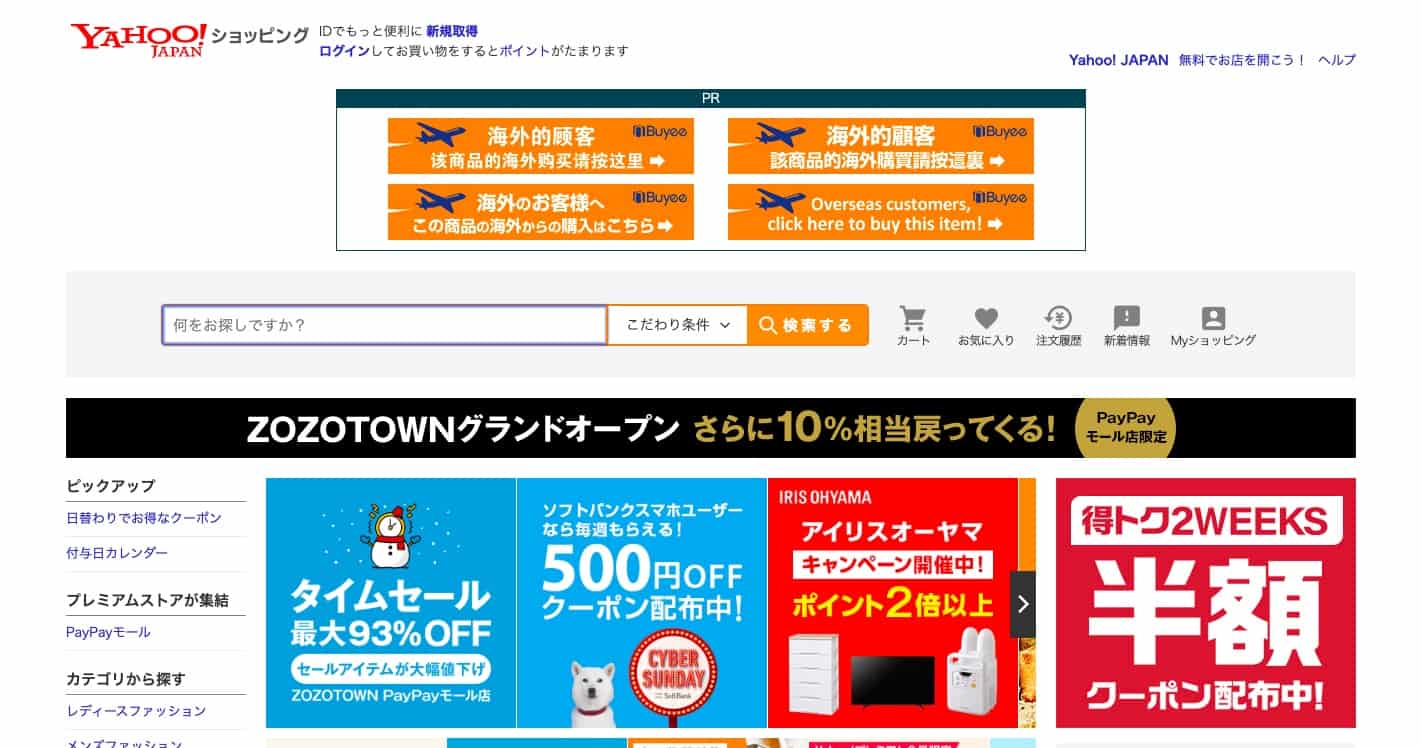 Owned by Soft Bank and Chinese brand Alibaba, Yahoo! Japan, including its Auction and Shopping arms, are stand out leaders in the Japanese online marketplace sector.

Another wildly popular marketplace for the peer to peer market is Mercari. An app launched in 2013, allowing Japanese customers to buy and sell their own goods, as well as browse items from well-established brands. Items are segmented into categories, including fashion, toys, sporting goods, electronics, and more.

Following great success in Japan, Mercari has expanded its presence to the US as of 2014 and the UK as of 2016. Unique features of the app include a live streaming function and the Mercari Now service, which allows sellers to take payment instantly.

DMM is a Japanese e-commerce platform and internet company that was founded in 1999. DMM’s e-commerce division specializes in digital products, such as e-books, online games, education services, video on demands, as well as mainstream DVD releases, mail order, and online rental.

Since its founding, DMM has gone on to expand its services, getting into the solar panel industry, the 3D printing industry, and even providing charity auctions, as well as forex service through DMM.com Securities. Zozo Town is a Japanese e-commerce platform for fashion and footwear, founded in 2004, out of an existing mail-order brand, Start Today, which had been in the Japanese market for decades. Since launching Zozo Town, it went on to quickly become the most popular fashion specific e-commerce site in Japan, offering customers a selection of products from brands both local and international, mainstream, and niche.

Zozo Town even has its own brands, which are now available in 72 countries and territories. This includes a custom-fit clothing brand called Zozo, and an at-home measurement system Zozo Suit. Wowma is a Japanese online marketplace, which was founded by KDDI, the corporation behind au mobile, one of Japan’s largest mobile phone providers. The site offers a collection of continuously modified and updated items, amounting to a catalog of more than 20 million products, to ensure they’re staying up to date with trends.

Items available on Wowma include cosmetics, home equipment, decorations, clothing, electronics, restaurant bookings, and personal care services. As a part of the KDDI, Wowma enjoys the benefits of being widely promoted to mobile users in Japan. Recently Fril was bought by Rakuten and merged with its flea market app, Rakuma, becoming a top destination for Japanese buyers and sellers looking for quick and easy sale of peer to peer goods. While the Fril site still receives the majority of traffic, it is Rakuma that is enjoying the profits.

With low fees, and the platform accessible on both desktop and mobile, Rakuma has become one of Japan’s notable flea marketplaces. Qoo10, formerly GMarket, is a Singaporean e-commerce platform servicing the Southeast Asian region through localized online marketplaces in various countries, including Japan. The platform, operated by a joint venture with eBay, offers a massive collection of products in categories including mobile, sports, fashion,  home living, books, and e-tickets.

Qoo10 Japan has grown significantly in recent years since Qoo10 acquired Gmarket, expanding its reach across Japan and other Asian countries.